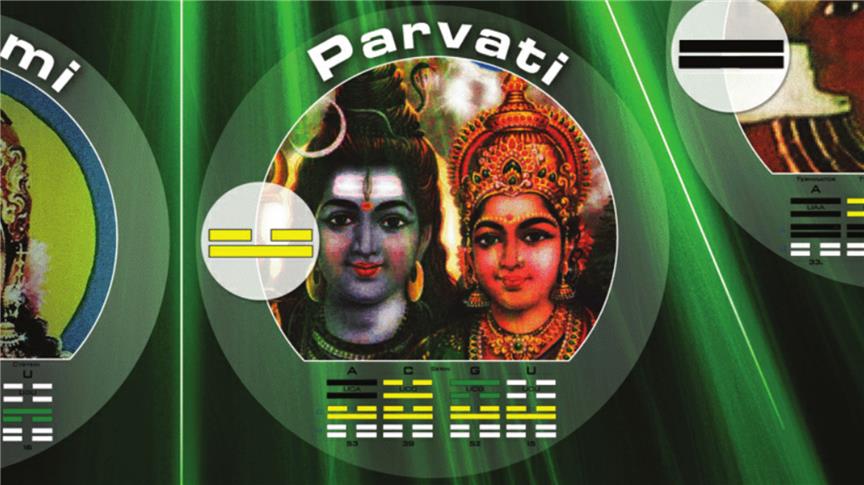 Excerpt from Face 11: Parvati | Lesson 8 of Quarter by Quarter: The 16 Faces of the Godhead

If you listen to my radio show today on stress, it was inspired by preparing the illustration for Serin. You’ve got five Root Gates. So, the first thing to understand about sweet old Parvati is that she is a chemistry of pressure and stress. There is a disproportionate stress that is placed on the female of the species. It’s the first thing to grasp about this.

And you see, the program doesn’t throw dice. It’s the one thing that—well, more than one, be nice Ra—Albert got right. It doesn’t throw dice; the dice are loaded. It knows precisely because the program is set. And it’s set against the yin. Now when I say “against” this is a duality. Someone had to have one side of the tension of a relationship and someone had to have the other side, let’s put it that way. And it is the yin that ended up paying the price for this. The price for this, by the way, is males that do not appreciate females. Males that take females for granted, that’s the price. Males that abuse females, that’s the price. And little girls that aren’t educated, that’s the price.

Your Godhead and the Quarters

Includes New eBooks | Understand the conditioning influence exerted by the four Quarters and your own Godhead through these five audio lectures from Quarter by Quarter: The 16 Faces of the Godhead.
$97.00 $135.00
DETAILS ADD TO CART

Quarter by Quarter: The 16 Faces of the Godhead + Bonus

Includes New eBook | Genetics, the Gods, the Program, and the wonder of the Mandala. Discover the 16 archetypal themes and their specific imprint, including your own. Limited-time discount.
$347.00 $497.00
DETAILS ADD TO CART

Lesson 11 - The Faces of Civilization

Mandala Gates 2 to 33. Theme: Purpose fulfilled through Form. With all Throat Gates activated, this is the world of manifestation, where mind is concretized into form.
$27.00
DETAILS ADD TO CART