All Roads Lead to the Throat Center 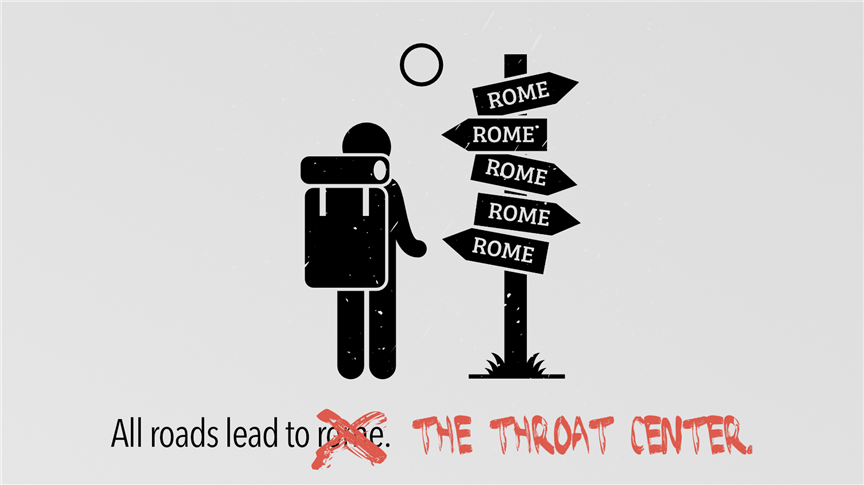 Ok, good morning to all of you. You can see that the subject today is a lovely one. It is so interesting for me going back to the original Rave Anatomy text and seeing where my priorities were at that time. After all, it was put together in the early ‘90s. In laying it out, I was laying out the basic infrastructure of how I would teach people the nature of the BodyGraph.

The first thing is the understanding that we’re dealing with the most complex of all the Centers. Not only is it the most complex of all the Centers, but if you look at the Gates themselves, you’ll see that they run in a band throughout the Quarter of Civilization. In other words, all of these aspects are in one Quarter of the wheel itself. The Quarter of Civilization is all about the establishment and the maintaining of the form principle on the planet. In other words, through the thyroid, in that sense, through the Throat, we see the ability to manifest form on the planet.

And not only that, but in looking at it, understand that all of these eleven Gates, every single one of them, is connected to the same biological function. It’s not like the Heart Center with four Gates and four very distinct biological associations, one for each Gate. In other words, the deep complexity of a Center that even though it only has four Gates as compared to the eleven here of the Throat Center, it has much more complexity at the biological level—the stomach, the heart, the gall system, the T cells—you look at that and you think each Gate representing that kind of biological information. And here, it’s just one thing.

Yet, when you look at the BodyGraph and you look at the potential of voice and you see the potential of voice in relationship to mind, only three of those eleven Gates that have words, in that sense, are derived from the mind. It’s one of the first things to come to grips with. For anyone who is beginning any kind of study in Human Design, so often things are just sort of mechanically recognized. In other words, here is the Throat, it has eleven Gates, and each Gate has a voice. But the thing that is so profound in all of this is to begin to understand what it means to listen to what is your true voice, and to understand where it comes from.

Excerpt from The Word | Lesson 2 of Rave Anatomy 1: Mapping the Mechanics of the Maia | Soon to be released individually

This fear of Authority begins with the archetype of the mother and the father. The 18th Gate is the Oedipus-Electra Gate. It is here that we begin to examine the opposite sex, that we begin to challenge whether...

When I began this series of looking at Profile, I began with the concept of the signpost, and I want to return to that.

Introduction to the Gates of Melancholy

As someone who has dealt with melancholy all of my life, and spent most of my life not understanding the nature of melancholy, simply manifesting my way through it, Human Design finally gave me an insight into...

The Fates and Gate 30

The Throat Center is the center of manifestation, and each of its 11 Gates are connected to the voice. Join Ra in examining the difference between open and defined Throats, and how the defined Throat can get locked in to influence us through not-self strategies.
$47.00
DETAILS ADD TO CART

The Primary Gates of Action | RA1.3

Our activity is controlled by three Centers: Emotions, Ego and Sacral. Ra elaborates on the primary Gates of action operating out of the Throat, and the dynamic between the 20/34 Manifesting Generator channel and the 43/23 Projector channel.
$47.00
DETAILS ADD TO CART

The Senses of The BodyGraph | RA1.1

This lesson explores our senses, both at the architectural level and, more mundanely, as tools that keep us alive, alert and in touch. Learn about each sense and how to align yourself with your architecture to experience life as you were designed.Topics covered: The Underlying Architecture of the B
$47.00
DETAILS ADD TO CART

Twenty of the 64 Gates are Fear Gates. Fears can have a conditioning influence, but also help us live our Design as they force our intelligence to grow. Learn how to move beyond the not-self use of fears that control you.
$47.00
DETAILS ADD TO CART

Mental and physical pressures are based within the nine Gates of the Root Center, and provide the fuel for the energetic direction of the body. This lesson will help you gain a deeper appreciation for the influence of the often-overlooked Root Center.
$47.00
DETAILS ADD TO CART

The 3rd Gate is the source of change and mutation in life. It is the controller of the movement of the genetic information throughout the BodyGraph. In this overview, Ra explores the power of mutation and its role in leading us into the future.
$47.00
DETAILS ADD TO CART

Gender differentiation is deeply imprinted in our consciousness. Learn how this conditioning differentiation manifests, and how to step back from the not-self mind to live in correctness.
$47.00
DETAILS ADD TO CART

Ra takes a deeper look at the nature of memory as a support in living our Design by holding us together and giving us the potential to transform. This lesson gives a deeper understanding of how collective memory functions, and of the importance of memory in our lives.
$47.00
DETAILS ADD TO CART

Streams are the bedrock of understanding the BodyGraph and its energy flow, and can give us a deeper understanding of ourselves and others. Ra looks at the influence of Individual, logical Collective, and Tribal Circuity.
$47.00
DETAILS ADD TO CART

The BodyGraph’s Gates, Channels, and Streams are the limitations that lead to differentiation, and give each of us our unique style. Learn how to live out the full potential of your style.
$47.00
DETAILS ADD TO CART

The Solar Plexus System is the emotional Authority of the majority of beings on the planet, and a great deal of distortion permeates its energy field. In this lesson, Ra uses the Solar Plexus Streams to illustrate the beauty of aware Emotionality.
$47.00
DETAILS ADD TO CART