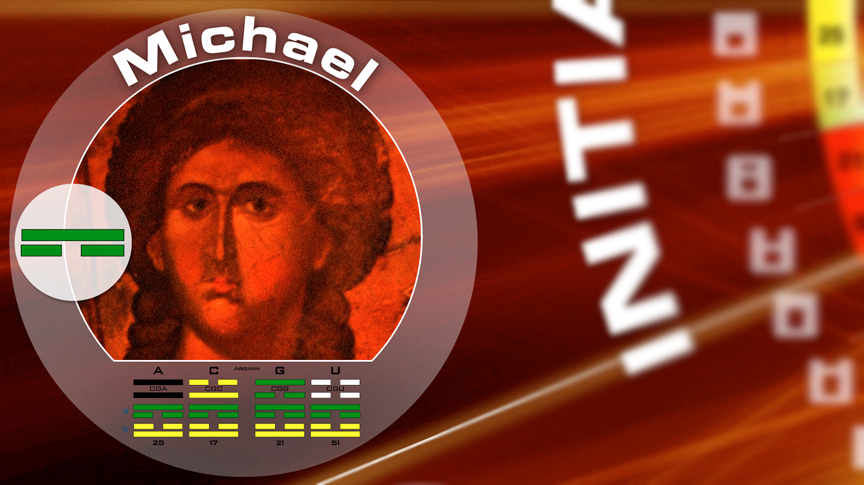 Like in any other quarter, the line of transition into the Godhead that embodies the principles of Love for the entire quarter is a very important marker of all the unresolved human dilemmas that cast their shadow unto the first half of each quarter. In this case, we have the line of Justice, or ‘just-ice’, like Ra used to ‘joke’ about it.

It so happens to be my emotional Manifestor line that makes me the ‘Jack of all Trades’ that I am. It is something obvious to any adult member of the human species that the ‘Empire of Law’ (rooted in survival fears and potential awareness of the Spleen) cannot guarantee ‘Justice’ (rooted in the release of feelings in the SP) amongst human beings, because they all seem to be born with as much potential for creative ‘goodness’, living in emotional peace with others, as for destructive anger and ‘evilness’ that threatens social integration.

THE RULE OF CYCLES IN WHICH DECLINE IS A NATURAL BUT NOT ENDURING STAGE.

The inevitable survival of right.

The knowledge and attendant faith that the powers of darkness will eventually destroy themselves.

'Those whom the Gods wish to destroy, they first make mad’. The correctness of crisis when it arises out of pure feelings.

A profound sorrow and cynicism that is not diminished by the understanding that darkness is self-annihilating. The sorrow or cynicism that comes with seeing that despite the correctness of the feelings, there is always crisis. 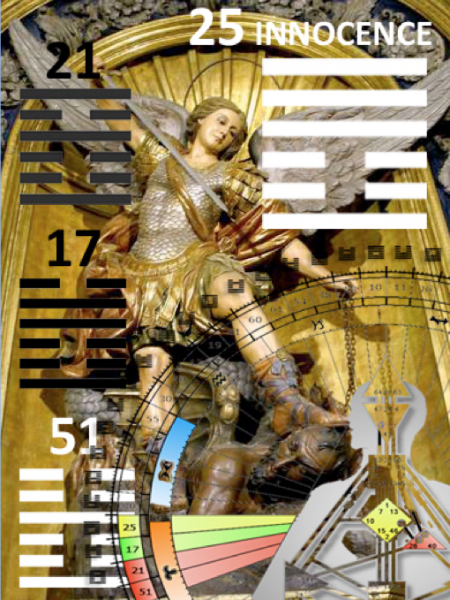 Well, Michael comes precisely to put a shocking end to all this human misery and despair in the face of adversity, and draw a clear line between those that earned the protection of God and those that only deserve punishment for their beastlike behaviour. Nobody ignores that, in any culture, the first laws were the laws of some God. Yes, you can kill or dishonour your parents or do anything that you want, as long as you do it in the name of some God, or some ‘holy’ father or Ghost…  (…into the house of the master, who can run faster… chase the laughter… Ra, the Clarion)

Just like so many still think that fear is an emotion, in the past most human beings have always used emotional power strategically to exalt or condemn the moral value of human behaviour. Michael’s Sword being discharged on the Devil is the clearest representation of the moral battle that takes place within each and every human being, between their rational Identity and their emotions. This battle is a distorted illusion since it is the emotions, and only the emotions with their purity, that can wash off any mark in the mental innocence of the individual spirit (Christians would call this ‘forgiveness’).

The truth is that by the time we get into the mental ‘Vessel of Love’ that is Michael, we enter into the realm of a coldness (Just-ice) that we only see reflected in the world of the inanimate (Gate 25), and that is something that holds no resemblance anymore whatsoever with the heat of the emotional field barely just left behind.

This is the channel of Initiation that is the existential core of this individual mystical dynamic, and it defines the overall competitive spirit of human intelligence waiting to be initiated and recognized. Needless to say, for most this recognition never comes.

In order to transcend the Darkness and limitations of our own animal nature (Eden, gate 36), a new order had to be created that would mentally separate seven centred humanity forever from the shadow of their own human emotions, until the mutations brought about by the industrial revolution started in 1781 and all the demystification done by sciences and the sexual revolution have allowed for emotions to consciously emerge in our mental horizon. But this article was not supposed to be about nine centred human emotional potential, but about the way the rational mind emerged as the expression of a false absolute called ‘Singularity’ that enabled us the existential arrogance and glory as cognitive creatures of creating God(s) in our own ‘strategic’ image.

The combination of the four gates - 25, 17, 21 and 51 - that serve this Godhead creates the definition of the channel of Initiation that imbues the whole quarter of mind with its fiercely competitive drive for mental excellence as a purpose. If we combine this with the potentially manifesting willpower of the 21 to control the tribe and the organizational possibilities of the 17’s capacity to see ahead into the future, it is easy to see the average homogenized mind of any human being as a source of deep ‘indoctrination’, where the perception of ‘good’ and ‘bad’ is not only based on second hand generalizations, but, of course, those generalizations can be reversed at any given time depending on the individual’s personal convenience. Does it remind you of anyone? We were all programmed to develop a mind like this through the way we get conditioned in the first seven years of our life. 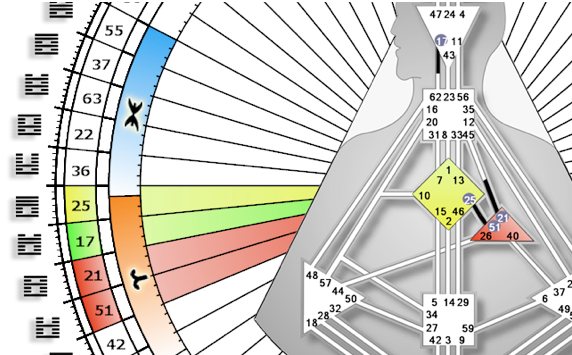 It is the inherent self-condemnation of wanting to be ‘better, faster, bigger and smarter than oneself’ that is at the root of all the false not-self morality that is entirely based on comparison… with and without others… (…into the house of the master, who can run faster… chase the laughter… Ra, the Clarion)

This is the face of the Godhead where the awakened Clarion sees what it possible when human intelligence does not become distorted by the fears that resonate through its own moralistic shadow… because this is the Godhead that no longer brings or cares about any questions about anything. This is not a mind that is lost because is has not yet learned how to walk on the World.

This is not Mitra’s power, where the mind is afraid of not having a conclusive answer to anything, because Angels have nothing to be afraid of, since God is always on their side. This is the mind that drives those who express themselves as soldiers of God on Earth, and therefore they represent the pontifical mind that preaches the holy words of God out of the pulpit of moral superiority. Does it remind you of anyone?

One thing is Kali, that has nothing to preach to you, and that simply destroys you and that’s it, because she ‘considers’ that beastlike humans cannot be educated, and another thing is Mitra’s mind that asks you: “Listen, do you know anything for certain?” But this pontifical mind of Michael has no doubts about its own capacity to convince you of the absolute value of the words of God without needing to destroy you, for all it needs to do is scare you with the condemnation of a godless like in eternal Hell.

It is here where the theme of ‘Justice’ stops being defined by our emotional and personal human condition, and takes on its divine moral qualities, represented by the sword and the scale that Michael holds in his hands in most iconic representations of his. This Godhead represents the supreme opposition between the forces of ‘Good’ and the forces of ‘Evil’, where the human mind has the potential to initiate itself through the empowering impact of surviving the waves of Shock.

It is through this ‘Centering‘ quality of this projected channel of Initiation (51/25) that the universal value of ‘Good’ and ‘Evil’ is being established and taught in every school that exists on Earth. It is also based on these universal values of ‘Good’ and ‘Evil’ that the values of moral hierarchy and responsibility are established in the ways in which human tribes (21) have always been organized (17) for the progress of civilization.

In order for God to be the winner of this false battle, his word had to be spread out, and that is why we needed to create his army of ‘angels’, and he archangel Michael is their absolute Commander in Chief.

Birds are naturally aggressive creatures, and Ra and mechanics have taught me to never trust something that has wings to tell me what to do nor how I ‘should’ or ‘should not’ feel about my very human condition. In this sense, angels are truly opposed to any form of personality awakening and surrender.

These forces were keynoted by Ra Uru Hu as ‘The 16 Faces of the Godhead’, and he thoroughly taught them himself in two outstanding semesters along the year of 2007 (original recordings of this master piece are available here).