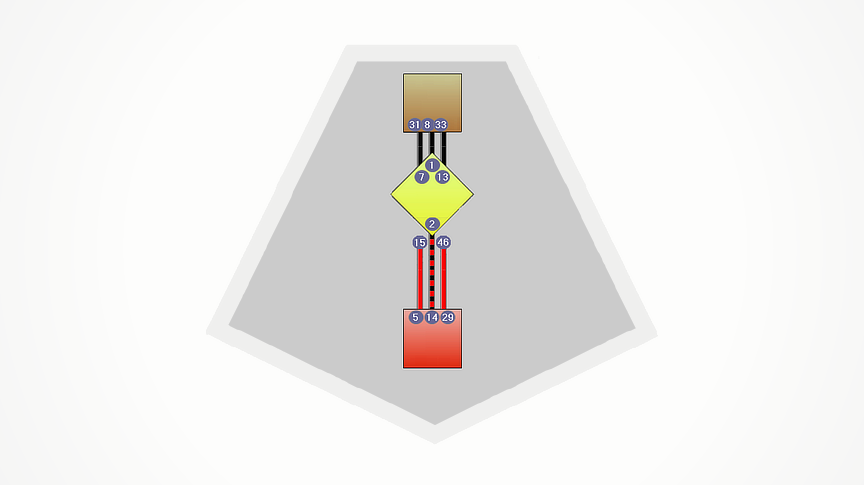 Hello, and welcome to the Design of Forms. Today we’re going to look at a trans-auric form, the Penta.

I should begin by explaining this trans-auric phenomena. All the other forms that we have looked at (Design of Form series available in Design Perspectives Episodes 46-53) are self-enclosed auras.

We are all born into Pentas, we go to school in them, we work in them – Penta is very much a part of the nature of being. The trans-auric form is something that almost smacks of science fiction until you actually see the analysis of how it operates, and only then do you begin to understand how powerful a force this is in our lives.

Of course a Penta has a Design, and the Design of the Penta is made up of those Channels that run between the Sacral Center, through the G Center, to the Throat. You can see that the Penta, in a sense, is a very different kind of creature in that it does not have any set awareness system: no Spleen, no Ajna, no Emotional system. It has no Ego. There is no pressure, (because) there is no Root. There is just this pure generative force, a driving force.

So much of the behaviour of human beings that is attributed to them, is actually a byproduct of what Penta does to us. For example, when we look at the materialism of our species, which is an obvious thing and somehow blamed on the spirit of individual beings, the reality is that this is Penta-driven because it is serving the potential of the gene pool. If you bring enough Pentas together you establish a gene pool. It is all about being successful, it is about children being allowed to grow into adulthood in healthy and ultimately successful ways. It is about the way in which we live together, the way in which we do things together both inside and outside in terms of the world around us.

The trans-auric forms are very, very powerful. You see, you become a different person when you enter into a complex aura. You lose all the nuances of the diversity that's there in your Design because it becomes restricted in this matrix. We all know that as children, when we finally get to leave home, that those times we have to return to our household can be so uncomfortable because the full potential of who we are as a being doesn't exist in that environment.

And by the way, it's not the fault of the parents; it's the way Penta works. It is deeply restrictive because it is designed to create harmony in a small grouping and give us a direction as a group in our lives. The program, the world we live in, operates through Pentas.

In Human Design, we deal with the Penta in two ways. First, it is the foundation of family analysis, so it gives us the ability to look at family groups and understand the dynamics of family that you cannot see in any other way. This unique matrix and what happens to each family member when they are in this Penta matrix..

The other way is to use it in business analysis, for small business groupings. In both groupings it operates under the same laws, the only aspect that's changed is the keynoting and the approach to understanding what one can do with Penta knowledge.

The Penta, a trans-auric form.

The Magic of the BodyGraph

For me, the BodyGraph is really the most fantastic aspect of the Human Design System. It is the only aspect of the mechanical construct that is truly original.

Eusociality: The Common Link between Human and Insect

One of the most heretical statements that I heard come out of Ra Uru Hu in his later years was when he said that “the family is not human”.

It's an extraordinary thing to understand the nature of your child's design, I know this myself. It allows you to be free of all of the uncertainties and concerns that arise out of what it is to be a parent.

The Power Column: From the G to the Throat

Explore the power and themes of verbally expressing identity. Learn why these themes are a “projected phenomenon”. Discover how to live your life’s process from an identity that is recognized.
$19.00
DETAILS ADD TO CART