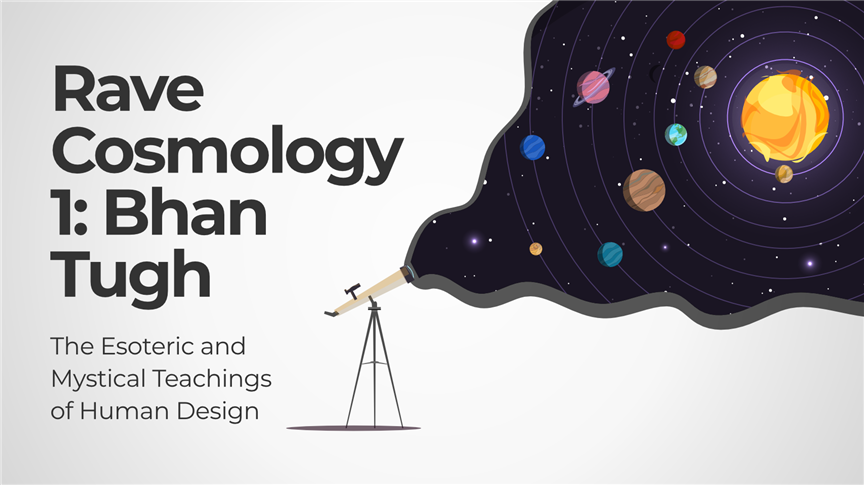 Limited-Time Offer: Discover the Heart of Rave Cosmology
Explore the mythology and the mechanics of the Biverse, as transmitted by the “Voice”

For those of us who apply the concepts of Human Design to our lives, the impact is far-reaching. While applying just the foundational aspects of the knowledge can be highly effective, coming to know and fully understand our own Design and that of others takes time and commitment. For most, the insights and clarifications Ra Uru Hu received over 8 days in 1987 became the guide to how we can each live a correct life, in accordance with our Design.

But the mythology and mechanics of the Biverse transmitted to Ra by the Voice over those eight days went far beyond the personal. It was not knowledge that Ra shared initially. As he said, in the first 18 years after his encounter with the Voice, he was “laying a foundation for the general grasp of this knowledge and to be able to have some kind of implementation capacity — Authority, Strategy and what we can tell people about their Type and Profile”. Ra describes this initial foundation as “logical and empirical”.

Beyond that logical and empirical knowledge is the deeper insight the Voice transmitted — insight into the cosmological basis of the nature of being. This is the Bhan Tugh, the heart of Rave Cosmology. Ra chose to share this knowledge through a course he originally taught in the Fall of 2005 as the first in a series of semester courses for the Rave Cosmologist certification program. His goal was to hand this knowledge down to any who were interested; but ultimately, his goal in offering this course was to give everyone the ability to recognize a Rave child, and the ability to pass this knowledge on to the next generation.

For a limited time, this 11-lesson, 13+ hour audio course, regularly $297, is available for $147. Your purchase of Rave Cosmology 1: Bhan Tugh includes a 260-page eBook transcript of the course (here's an eBook sample), and a one-hour audio: God, Morality, Religion and the New Age, regularly $37 but included as a bonus with this special offer.

This is a unique opportunity to explore what Ra called “a new synthetic mythology underlying all other mythologies” — the secrets at the heart of creation, love, the Gods, and the end game for the life process as we currently know it on this planet.

View the Details tab, and listen to the excerpts below, for more information on what the eleven lessons of the Bhan Tugh hold for you. This special offer is available now for a limited time.

Lesson 1
The Beginning Before the Start
In this first lesson, Ra talks about his mystical process and his experience with the Voice. He offers an explanation of the crystals and how they operate, both within the atmosphere and beneath the earth. This lesson introduces us to a journey through the Bhan Tugh plates — what Ra calls his cosmic fairytales, representing a new synthetic mythology underlying all other mythologies.

Lesson 2
The Bhan Tugh
Ra explores the physics that underlie the creation of a basic duality of yin and yang families: Quarks and Leptons. He expands on the two Design crystals that existed originally, and how the Personality crystal is evolving to create a viable neocortex for the experiment of consciousness to emerge. Is it possible that the totality we live in, like a fetus within a womb, is as yet an unborn entity? And what part do Neutrinos, sourced from the stars, play in this process?

Lesson 3
The Primary Magnetic Monopole
Historically, humanity has always looked for ‘the Gods’ in an attempt to understand our purpose and locate a manifestation of higher intelligence. What existed before the start of creation as we know it? Prior to the emergence of our Biverse, a geometry existed in the form of a programming agency of consciousness beyond the Ring Pass Not. We are one living, evolving entity that will, at some point, be born.

Lesson 4
The Creation of Personality Crystals
The separation of the Magnetic Monopole and the Design Crystal creates the potential for life to form. We each carry an aspect of the shattered Design crystal. How does our relationship to this crystal affect our lifelong search for love? Ra further dives into concepts such as the Center, the Camel, the Dog and the 16 Faces, offering an explanation for these powerful, incarnative forces.

Lesson 5
The Dog
Ra explores the Camel and the Dog more deeply. The Voice referred to the Sun as the Dog, which creates and generates the Neutrino string and is part of the deepest programming of human consciousness. As we receive information from the Sun via the Neutrino stream, we are connected to everything within the Biverse. We have participated in the process of evolution for billions of years; Ra discusses the current breakdown of the program.

Lesson 6
The Camel
This lesson further deepens our understanding of the Center, the Camel and the Dog; all dwell within the Sun and fulfill their various functions, from generating, to filtering the Neutrino string, to building and maintaining the solar system. Ra discusses the role of Mercury in communicating Neutrino information to humanity, and why those born between 1936 to 1941 carry specific information received directly from the Center.

Lesson 7
The Four Corners
Jupiter, Sirius, Dubhe and Alcyone — the nature of the world we experience is the byproduct of these four forces at work. Ra discusses the role of Sirius in the current breakdown of the program, and why it is becoming more difficult for any kind of revelation to work as the lines of information close down. The potential for the final mutation, the solar plexus mutation, means the end game for the life process as we know it.

Lesson 8
The 16 Faces
Every God known to humanity originated from one of the ’16 Faces of the Gods’. Each of these aspects of the Rave Mandala wheel is ruled by a ‘God’, a crystal of consciousness functioning as a programming agent. The Faces are instrumental in stepping down higher frequencies and spreading them out around the wheel, andour earthly existence is a reflection of these influences that create the Maia. We each originate from one of the 16 aspects, and therefore our fractal relationships are

Limited-Time Offer: Discover the Heart of Rave Cosmology
Explore the mythology and the mechanics of the Biverse, as transmitted by the “Voice”