For now: Survival is Funny and Life is Serious 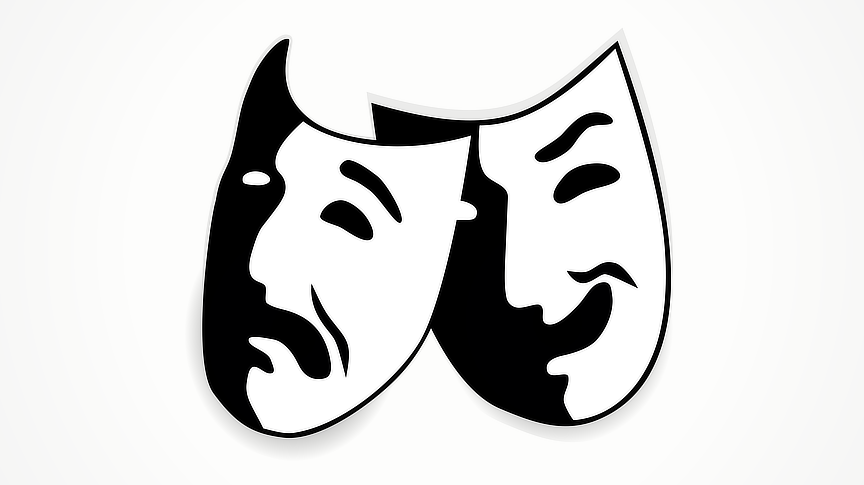 It is an ancient debate, a classic duality: Comedy and Tragedy. There is the proverbial banana peel, the one who slips on it has a tragic fall and the witness can’t help but laugh. Are they just different faces of the same root, as so many have implied?

Design, with its mechanical perspective, sees each as unique and separate processes with different origins and only one commonality: fear. Comedy is a survival response and has its origin in the Splenic Center. This Center is the heart of our primary fears, of which the most personal and potent is the very fear for survival.

Being is a life and death experience and the risks to life and limb for most of human history have been myriad. It is this very fear for survival that acted as an engine of awareness. How often has one walked away from a serious accident laughing? The giggling survivor is an ancient response to cheating death. It may make the banana peel witness feel ashamed for laughing at someone else’s pain but mechanically, it was the correct response. The giggling survivor, delighted that it wasn’t them, is so much the core of laughter.

The origin of tragedy is found in the Solar Plexus Center. Tragedy is also a survivor response for the price of the human experiential way. The fear that underlies tragedy is the fear of the fates. Tragedy rides the emotional wave of desire and expectation. To be human is to fail and stumble as well as triumph. The one who slips on the peel, bemoans their fate and cries out at life’s cruelty. The Solar Plexus system is deeply sensitive to the ordeal of being in form.

What we call comedy and tragedy are mental concepts formed through the collective processes of the Ajna Center. In this context, comedy is logical and tragedy is abstract. What is important to grasp is that Splenic beings are more likely to find humor in their life experiences, whereas Solar Plexus beings are more likely to take the life experience seriously. There is no moral distinction here. Splenic beings tend to see Emotional beings as too serious and Emotional beings see Splenic beings as indifferent, and each preach to the other. It is an old joke that will only fade when the Solar Plexus is transformed in the coming centuries, when the experiential way is endowed with awareness.

Living with Feeling: A Field Guide to the Solar Plexus

Living with feeling can be a dilemma. In the past 18 years of experimenting with Human Design, I’ve found a few field notes helpful for the defined Solar Plexus person, and those who choose to live with them.

The Design of Comedy: Clown, Fool, and Idiot

What is the purpose of humor? Discover the root of comedy and the 3 different types of humor in the BodyGraph.
$27.00
DETAILS ADD TO CART

The Spleen: From Vitality to Identification

Logic is the only form of awareness that can actually pursue perfection. Discover how the Spleen and Root Center fuel the collective need to find stable patterns for the future.
$19.00
DETAILS ADD TO CART

Journey through the individual stream of Intuition. What does it mean to have a spontaneous, in-the-moment awareness? Explore the existential quality of the Spleen, and how it works.
$19.00
DETAILS ADD TO CART

The Spleen: From Ambition to Egoism

The first awareness Center that developed in mammals. Learn how the Spleen is connected to the immune and lymphatic systems, and in charge of survival. What are your potentials if you have an open Spleen?
$19.00
DETAILS ADD TO CART