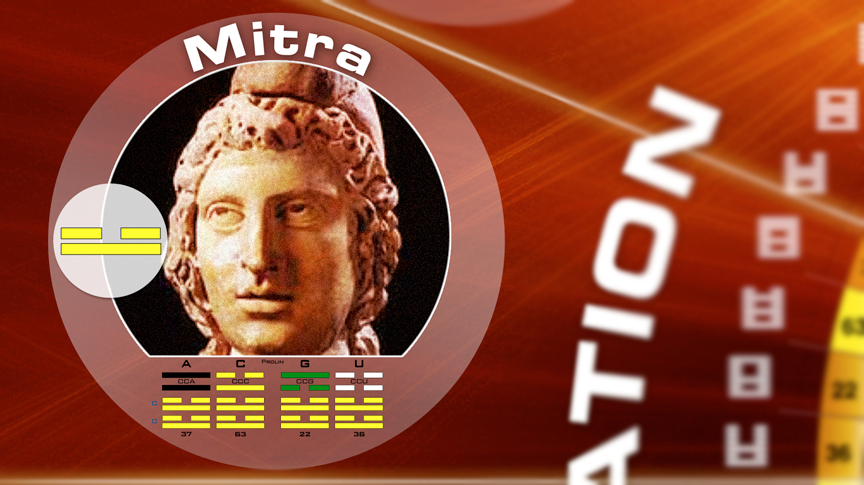 The impact of the gods upon the human psyche has always been so deep that, despite of knowing their pervasive capacity to condition us, I cannot avoid feeling some personal ‘inclinations’ that seem to serve some of them better than others, obviously rooted in the way my own design is predisposed to resonate with life, but also in what drives my Not-Self mind to identify with these ‘unifying’ and ‘uniforming’ forces of… homogenization in the end. That is why most human beings have a better relationship with whatever ‘their’ Godhead is than they will ever have with themselves.

Self-condemnation is the most common disease in the spirit of human beings, and most exceptions to that become the manifestation of those who are ready to condemn everybody else… and no counting of the innocent. Awareness has to be something else.

In this transition from Kali to Mitra we live through that moment of the yearly program that has barely started - surfers love it -when the wave begins to loop just before breaking. The emotional pressure that has accumulated during the three weeks of the Kali time, trying to bring emotional hygiene to the needs, desires and passions that are going to drive us through the cycle, is now ready to take the first ‘good reason’ to be confronted and released, or not.

For many, who are afraid of the consequences of letting go and allowing the emotional wave to break at the shore and bring the necessary renewal to their emotional lives, it may become just another layer of self-denial that deepens the stagnation and disempowerment of their own spirit.

Whether that fear comes from having an undefined Solar Plexus or from not knowing how to properly integrate the wave in one’s own self-expression, we cannot forget that, as these are gates that are part of the quarter of Initiation, each of these emotional gates is a root that - through the release of the wave of pleasure and plain - reveals the aliveness of our human spirit in the mental horizon of our self-reflected consciousness.

Emotional gates that point upwards in the Rave body graph are driven by a very different way of dealing with the nature of the wave, as revealed by the very centres they are pointed at. The gates 37 and 63 point respectively at the emotional need to control the wave (or not) and the pressure to doubt about ‘No Truth in the Now’, and neutralize the pressure with a logical mental answer that defines the nature of the emotion as a pattern (why/because).

A practical example of that would be: “I don’t understand/like what he/she did, but he/she is my friend/uncle/partner/grandparent/neighbour, and that is why I have to accept him/her as he/she is.”

As long as there is an answer, whether right or wrong, the ego is (supposedly) going to be able to control the power of the tribal wave, and the display of negative emotions can be (temporarily) avoided. So much of this ‘avoidance’ only feeds the inbuilt resentment that is to be found in all emotional ‘bargains’ that are rooted in homogenized co-dependency, call it marriage.

By the time we get to the gates 22 and 36, we arrive at the emotional zone of manifestation, and this is the place where having one answer, or many, simply does not matter anymore. These emotional waves are not about the control that serves the avoidance of negative emotions, but about the driving forces of passion and desire seeking the manifestation of change and metamorphosis in the throat. As a consequence, these two gates simultaneously bring along with them the pseudo-spiritual hopes of the ‘Promised Land’, preached by all kinds of false prophets, as much as the despair and anxiety that drives those who seek the light at the end of that spiralling emotional Tunnel, and never get anywhere.

As an emotional Manifestor and a ‘Jack of all Trades’ myself, I live so much of this as the embodiment of those two principles in my daily life. I only learned to love the endless paradox that reveals that ‘Knowledge is not Power’ through the beauty of Human Design coming into my life.

All of this falls within the realm of Mitra. Now, what does this have to do with questions, right?

Well, the Not-Self runs on mental decisions, and mental decisions are based on ‘having the answer’, but as gate 61 reveals the truth is never in knowing the answer, but, if anything, it is in knowing the question? The power of Mitra is not directly responsible for the use that humans make out of their answers, or if they ever find one, but in a much more subtle way it is responsible for getting everyone to identify with the pressures emerging from homogenized questions. Here they go.

63 After Conclusion – Can an Answer ever be enough?

22 Grace – Is there anyone or anything worth listening to?

36 Darkening of the Light – Is this the way life is supposed to be?

The joke is it does not matter what the answer is, because the truthful answer to these questions can only be ‘Wait and See’. And yet, the Not-Self mind is so anxious to conclusively resolve them. Make sure you remember the ‘mental dilemma’ that goes along with the strategy of your type, for it is the only question that will always have and inspiring effect that will move you closer and deeper towards your signature.

These forces were keynoted by Ra Uru Hu as ‘The 16 Faces of the Godhead’, and he thoroughly taught them himself in two outstanding semesters along the year of 2007 (original recordings of this master piece are available here).