The Hexagram, Profiles, and Harmonies 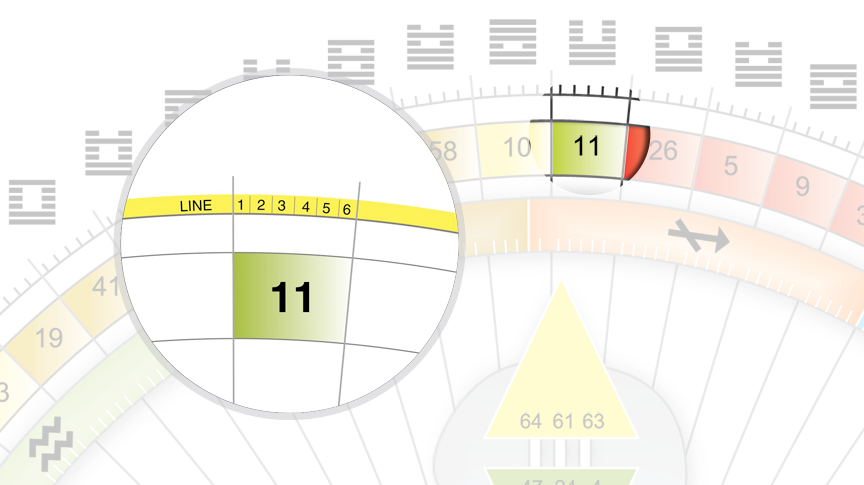 One of the most important things we discover with our design after we find out what our Type is and what our Strategy is, is that we begin to look at the framework upon which it is based. In that, we come to the Profile.

Profile is very important for us. There are two basic things that we are dealing with in our design. One is our characteristics and the other is our role. The characteristics are the various aspects of our design that we have to deal with: Centers that are open, the not-self Strategy that arises from them, the quality of definition we have, the authority that is there for us, the Type that we have.

So when we’re looking at the personality or the design, we get to see the Line that is being activated. That is, your Sun and your Earth of your personality are activating the same Line in opposite Hexagrams.

The Hexagram—the hex means six—the Hexagram is made up of six Lines. Now those Lines are either solid, yang, or broken, yin. Those six Lines are always read from the bottom up. That’s very important. In other words, the first Line of a Hexagram is the bottom of the structure, it is the foundation. 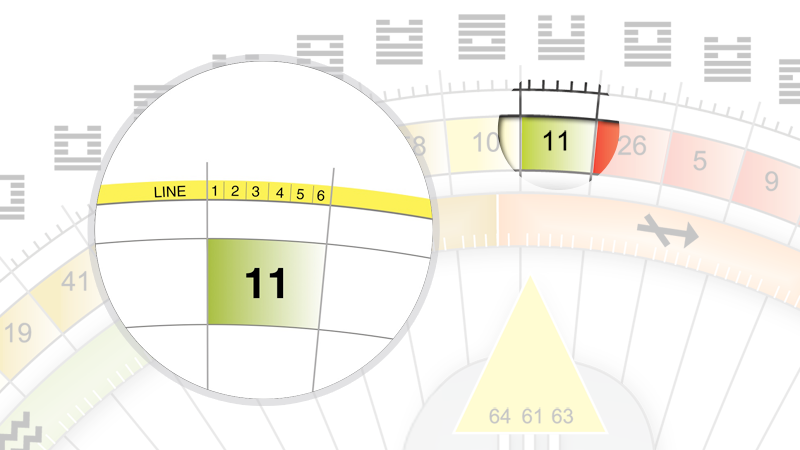 As you move upwards—first, second, third Line—you come to what is called a trigram. That is, the Hexagram is divided into two equal parts. There is a lower trigram, and that’s the first, second and third Lines. And there is an upper trigram, that is the fourth, fifth and sixth Lines. Now, it’s very important to remember that the Hexagram is divided into two. It’s important because there are special relationships that exist between the lower trigram and the upper trigram. 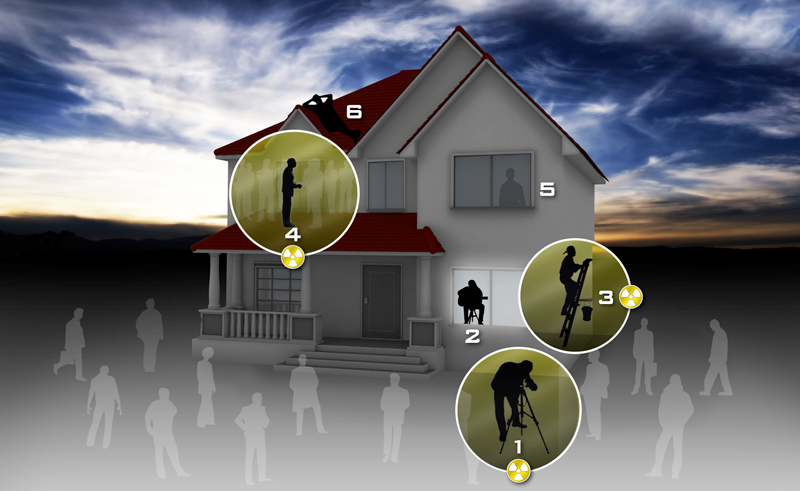 So when you’re looking at the Hexagram to begin with, you have to see very clearly that there is a basic structure. And in that basic structure the values of each Line are essential to understand. Now, it doesn’t require an enormous amount of study.

One of the advantages of Human Design is the nature of its language and the ability to be able to understand basic concepts through very simple keynoting. So for example, in design analysis when we’re looking at Hexagram structure we say that the first Line is a Line of introspection. In other words, this is the foundation, this is a need to look inward, this is a need to study, and it goes on and on, a need for security - all of the things that are related to this first Line theme of foundation.

In looking at the Lines, in understanding how they operate within the Hexagram, in understanding the relationship in values, in other words, what each Line represents, this is not simply a breakthrough in being able to look at your role and to understand the dynamics, the general dynamics in the roles of others. But for those of you who really want to explore deeply into the knowledge, it gives you access to the Rave I’Ching.

The Rave I’Ching is not a textbook. It was written outside of Frankfurt, Germany in a small village called Frankfurt am Berg in 1989. It is as much poetry as anything, as the traditional I’Ching was.

For many people, particularly those of you who need the Rave I’Ching in translation, it is exceedingly difficult at times to really grasp the intent, the meaning, the value of certain Lines. The Lines themselves as poetic expressions in the Rave I’Ching carry allusions to both contemporary culture and to historical references. And so often for students, particularly new students entering into the study of Human Design, being able to grasp the I’Ching seems daunting.

And yet, there is a key. And it is this same key. In understanding the structure of the Hexagram, the ability to understand the nature of a Line, that the moment that the nature of that Line is placed into context with the way in which it’s described in the Rave I’Ching opens the door to a profound insight into what is really being expressed in that Line. In other words, it is a key to interpreting the Rave I’Ching.

Over the years in my work teaching professionals in Human Design, I have stressed many times that once you really grasp the structure of the Hexagram and you understand the dynamics of the gates within the graph, that you’re quite capable of writing your own I’Ching. You see, it’s simply based on the same solid logical foundation. So the process, the real process, of beginning to grasp how you can look at a chart and understand the basic principles in that chart, one of the key elements is the structure of the Hexagram.

The Six Lines of the Hexagram

The foundation of Human Design analysis is the Hexagram and its structure. From Profile to Gate and Channel thematics, the six Lines reveal profound information.

Understanding Your Innate Role - Why Your Profile is So Important

A journey through the lines from the perspective of the Channel of the Prodigal 13-33: The Design of a Witness

I saw a recent post on Facebook asking about Profile compatibility, and this is the first time in a while I felt compelled to write a response.

The Decoding of the Hexagram - The Six Lines

In this transcript of a six lecture series, Ra looks at the lines from the perspective of their number continuity and their relationship to the themes that lie below the line—the Base, Tone and Color.
$37.00
DETAILS ADD TO CART

Incarnation Crosses by Profile II: The Quarter of Civilization

Quarter 2: Purpose fulfilled through Form. Covers Gates 2 - 33 around the wheel of the Rave Mandala.
$75.00
DETAILS ADD TO CART

Incarnation Crosses by Profile III: The Quarter of Duality

Quarter 3: Purpose fulfilled through Bonding. Covers Gates 7 - 44 around the wheel of the Rave Mandala.
$75.00
DETAILS ADD TO CART

Investigator - Martyr Introspection - Adaptation. A self-absorbed profile that seeks a solid foundation before feeling secure. Exploring life through trial and error offers wisdom of what does and does not work.
$19.00
DETAILS ADD TO CART

While the 1st line is making sure its foundation is solid, the 4th line is waiting for the right opportunity to share with others. Here to have great influence and impact on people within their network.
$19.00
DETAILS ADD TO CART

The 2nd line needs to be called out for its natural talents. Through the 4th-line network, it can find opportunities to share its gifts. Learn why this profile has great power as a “missionary.”
$19.00
DETAILS ADD TO CART

Explore how the Projection field greatly impacts this profile. Learn how aloneness enriches the 2nd line’s natural talent and understand the seductive power of the 5th line, and the importance of practicality & reputation.
$19.00
DETAILS ADD TO CART

The 3rd line is the ability to discover, adapt, and survive through a “trial and error” process. Learn how the 5th line is pulling a strong projection from others, which can have a far-reaching influence in the world.
$19.00
DETAILS ADD TO CART

Explore how the 3rd-line theme of trial and error creates resilience. Learn about the 6th-line role model and its potential for wisdom as it moves through its three-part life process.
$19.00
DETAILS ADD TO CART

Discover how the 4th-line opportunist personality is here to influence and externalize to those they know, and how the 6th-line body goes through its unique three-part life process.
$19.00
DETAILS ADD TO CART

Learn the unique geometry of “fixed fate.” How does the investigator support the 4th line personality? Learn how they influence those they know in a uniquely fixed way.
$19.00
DETAILS ADD TO CART

The 5th line has the gift of being able to universalize to strangers while living in the projection field. How to establish a firm foundation from their 1st line unconscious in order to offer practical solutions.
$19.00
DETAILS ADD TO CART

The 5/2 is a natural from its 2nd line unconscious and is projected on with its 5th line personality. Learn how to manage the projection field and recognize the right call to externalize your natural gifts.
$19.00
DETAILS ADD TO CART

Learn how the 6th line goes through a three-stage maturation process, and about the distinctly different qualities of each stage Why the 6/2 is a unique role model of living naturally as themselves.
$19.00
DETAILS ADD TO CART

Learn why this Profile goes through a difficult and at times chaotic period during the first 30 years of life. There can be great wisdom in a 6th line role model, because it never stops making discoveries.
$19.00
DETAILS ADD TO CART