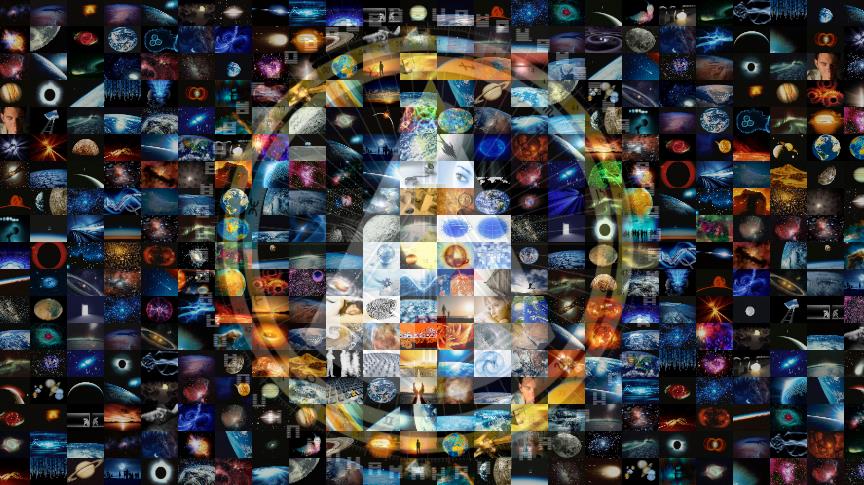 Welcome to this introduction to the Human Design System. I’m Ra Uru Hu. I know that your interest is in what Human Design can do for you, and Human Design is truly for you... for the enhancement and enrichment of your individual experience.

But first, some background.

Note: You can watch the video, and/or read the transcript
(text has been edited for clarity)

In 1781, coincidental to Sir William Hershel’s discovery of the planet Uranus, a momentous event took place: The advent of the nine-centered being. “Centeredness” is a structural aspect of evolution. Neanderthals were five-centered like modern Mammals, and so-called Cro-Magnon or Homo sapiens were seven-centered beings.

We are nine-centered. We are a transitional form, “Homo Sapiens in Transitus.” Human Design is the knowledge of the mechanics of the nine-centered being and this knowledge is the basis of the Science of Differentiation. Since 1987, we have been awakening to our nature and its extraordinary potential. 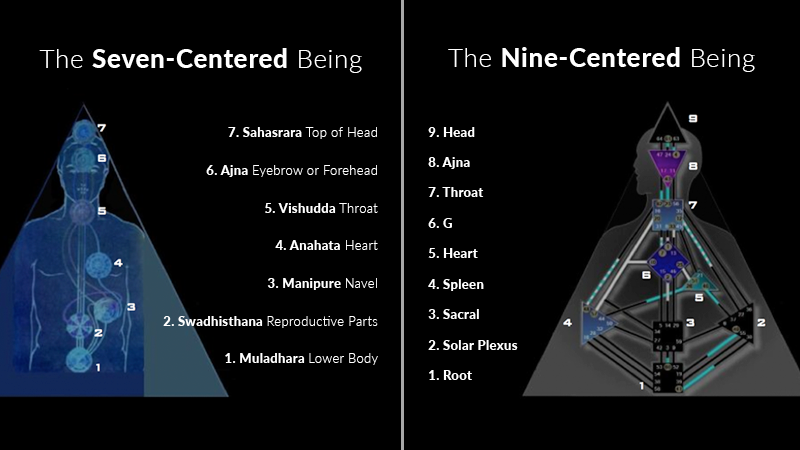 As fitting a new evolutionary form, the Human Design System is a synthesis of past exoteric and esoteric knowledge integrated into a unique revolutionary mapping, the Rave Mandala and the Individual Rave BodyGraph. The Mandala is the imprinting matrix. Though based on the astrological wheel for the purpose of tracking the planets, the Rave Mandala contains 69,120 unique points of imprinting.

The inner wheel of the Mandala is divided into the 12 astrological constellations. The outer wheel is divided into 64 partitions. The 64 is derived from the ‘I’Ching’ and its 64 Hexagrams. This construct divides the wheel into genetic potentials. In Human Design, planetary imprinting is classified according to position in a Gate. Every position within the arc of that Gate has value. A Gate has an arc of 56 minutes 15 seconds, and each Gate can be subdivided into Lines, Colors, Tones and Bases, giving 1080 unique points of value. Human Design is truly the Science of Differentiation. 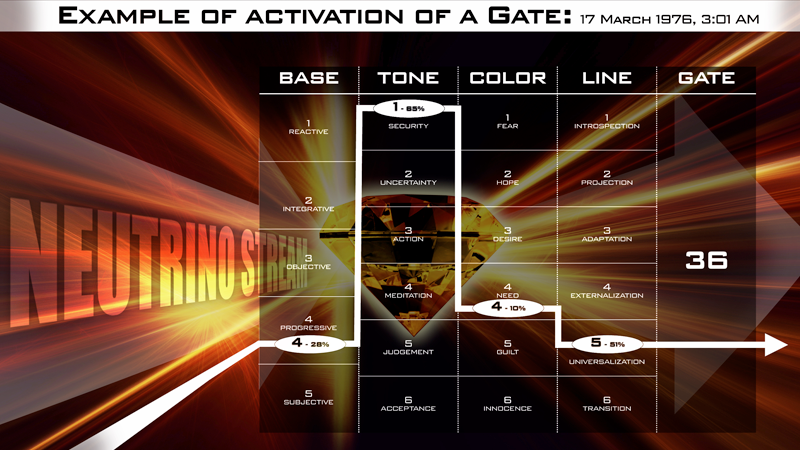 It is the Rave BodyGraph that transforms all these possibilities into the magic of a unique individual design. The BodyGraph is truly new; an extraordinary map to individual transformation, and it too is a synthesis. The graph is built on Centers or energy/information hubs. The Centers are rooted in the Hindu-Brahmin Chakra System, which had form principle mastery in the age of the seven-centered being. The connections between the Centers known in design as ‘Channels’ are from the Sephorith of Kabala and the Gates at either end of the Channels are from the I’Ching. It is the I’Ching Gates that are the key.

The nine-centered being is a binary consciousness. In Rave Cosmology the totality called the Biverse is the byproduct of a juxtaposed tension between Atomics and Dark Matter. According to the cosmology, in the beginning there were two Dark Matter ‘crystals’ that shattered and dispersed at the Big Bang. The Yin/Yang expressed through Design and Personality Crystals. The emergence of atomics also produced Neutrinos, the most abundant of all things. The Neutrino Ocean produced by all the living stars is filtered by the Crystals of Consciousness. Every living thing is endowed with two crystals of consciousness, an aspect of the original Yin (the Design crystal that transforms the neutrino data into the body and the life) and the original Yang (the Personality Crystal that transforms the neutrino data into the potential of self-reflected consciousness). What binds the Biverse together binds us as well. It is the third and crucial element in the structure of a nine-centered being: the Magnetic Monopole. 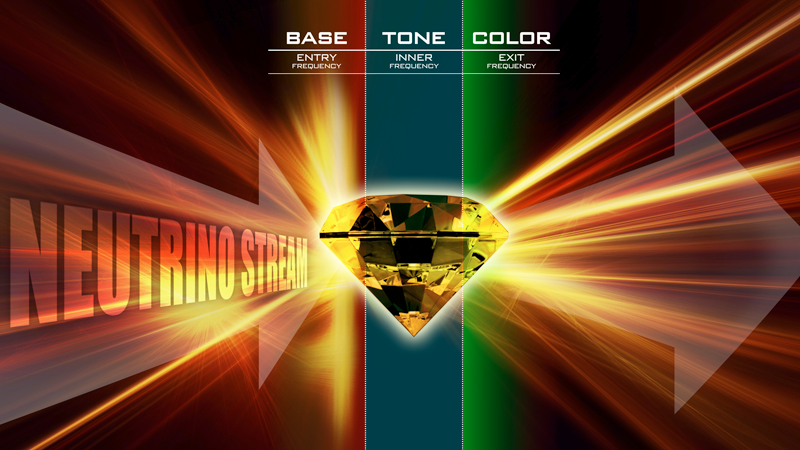 In our Design these three elements have specific locations within the body. The Magnetic Monopole sits in the sternum and holds us together in the illusion of our Separateness, and gives us our direction for life. The Design Crystal sits within the skull and is the intelligence that operates and maintains the body. The Personality Crystal sits above the scalp and is the intelligence we recognize as who we think we are. The Design is the Vehicle, the Magnetic Monopole is the Driver and the Personality Crystal is the Passenger. One of the profound potentials in Human Design is the awakening of passenger consciousness.

The two calculations in a Human Design chart display the imprint of each Crystal separately. In the Rave Chart you see two sets of data, one on each side of the BodyGraph. On the right is the Personality data coded in black and on the Left the Design data coded in red. At conception the fetus is endowed with a Design Crystal that manifests the evolving form and a Magnetic Monopole that maintains its unique integrity and destiny. Only when the vehicle is ready does the Personality Crystal incarnate. This event takes place exactly 88 degrees of the Sun’s movement before birth or more simple approximately three months before the birth. In a Human Design calculation the birth time calculation of the positions of the Sun/Earth Lunar Nodes, Moon and planets form the Personality data base, the black, the "who you think you are." Calculating backwards from the birth time 88 degrees of the movement of the Sun, you arrive at a point that is the basis for the second calculation of the planetary positions. This is the Design data base, the red, the body, the bio-genetic inheritance, the unconscious. 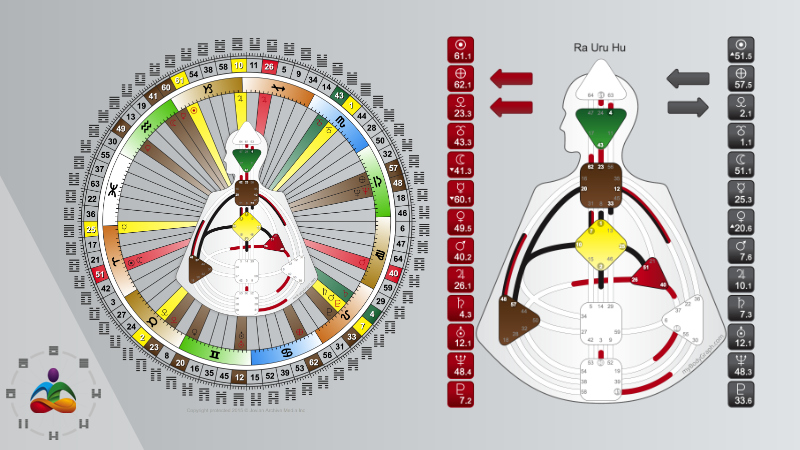 Once the two calculations are complete and the positions of the imprinting objects indicated in the Rave Mandala, then the magic of a unique individual design can emerge. The positions in the Gates of the wheel can then be transposed to the graph itself. This is illustrated by coloring in half of the Channel. The database comes alive in the Rave BodyGraph.

The graph is a map. Imagine that each Center is a community and these communities are connected by roads and tunnels. The roads in black are what is conscious and the tunnels in red are what is unconscious. When Centers are connected to each other, when the Gates at either end of the Channel are activated, a Definition is formed. A Definition is what throughout the life will be reliable and consistent.

Human Design is the Science of Differentiation. There are endless possibilities in the way BodyGraphs are configured. There are four different kinds of Definition:

Most important, Definition or not leads to the core of Human Design knowledge and its value to you, Type. 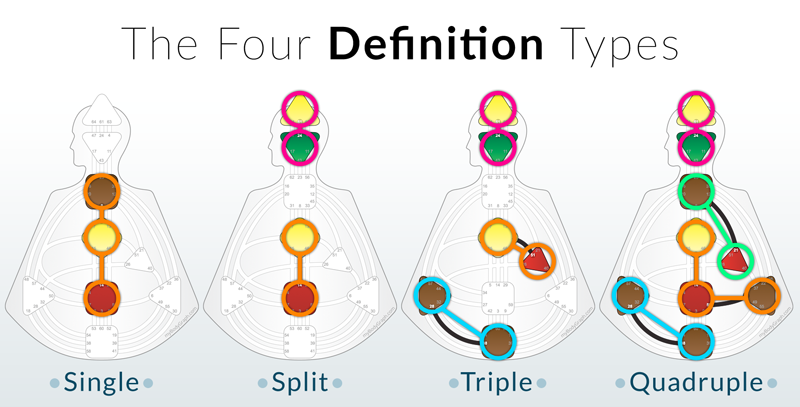 Human Design is mechanical knowledge. The mechanics reveal that we are a binary consciousness. The graphing clearly indicates that we are a juxtaposition of two sets of data. Herein lays the dilemma and the greatest challenge of the emerging nine-centered being. We are all objects moving through a duality of this and that. Our seven-centered ancestors were limited to a singular conscious, and relied exclusively on mind for decision-making. Human Design is about transforming your life by making decisions as yourself and it is not about mind. It is Type that reveals the mechanical strategy and authority derived not from your mind and its deep openness to conditioning but from your body, your vehicle, your Design consciousness.

This is the great experiment that defines Human Design. Experiment with your Strategy and Authority. Free your mind to see and discover the beauty of your unique purpose. It all begins with Your Type.

Generators are the dominant Type on the planet with nearly 70% of the population. They are the driving life force of the planet. Their strategy is to respond and through response to find satisfaction and avoid frustration. They have an open and enveloping aura and are here to know themselves.

Projectors are around 20% of the population. Their strategy is to wait for the Invitation to find success and avoid bitterness. They have a focused and absorbing aura and are here to understand the other.

Manifestors are about nine percent of the population. Their strategy is to inform before they act to find peace and avoid anger. They have a closed and repelling aura and are here to understand their impact on others.

Reflectors are without definition and are just over one percent of the population. Their strategy is to wait a full cycle of the moon before making decisions to find surprise and avoid disappointment. They have a resistant and sampling aura and are here to see difference. 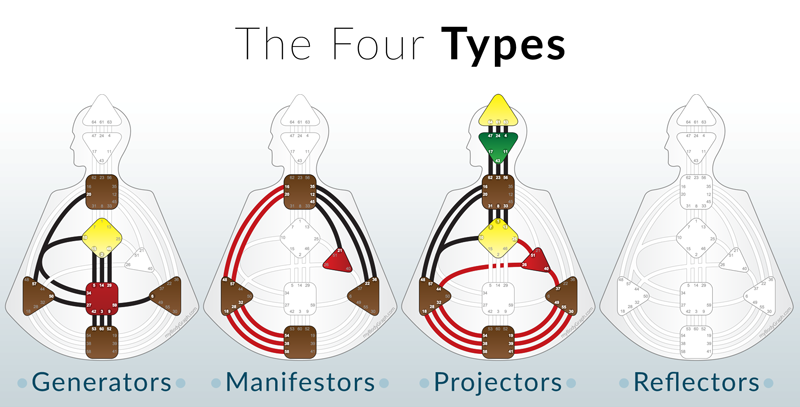 The quality and potential of your life is based on the decisions you make and the directions they lead to. Look at any Rave Chart and you will see an obvious duality between what is activated and colored in and what is white and open. As humans we are ruled by the genetic imperative to be attracted to what we are not. This genetic law that maintains the health of the gene pool pulls us towards conditioning. Each open center has a not-self strategy that directly impacts mental decision-making. For the majority of Human Beings, their minds are conditioned by their openness and this distorts their decision-making. Your strategy sidesteps this basic pitfall. 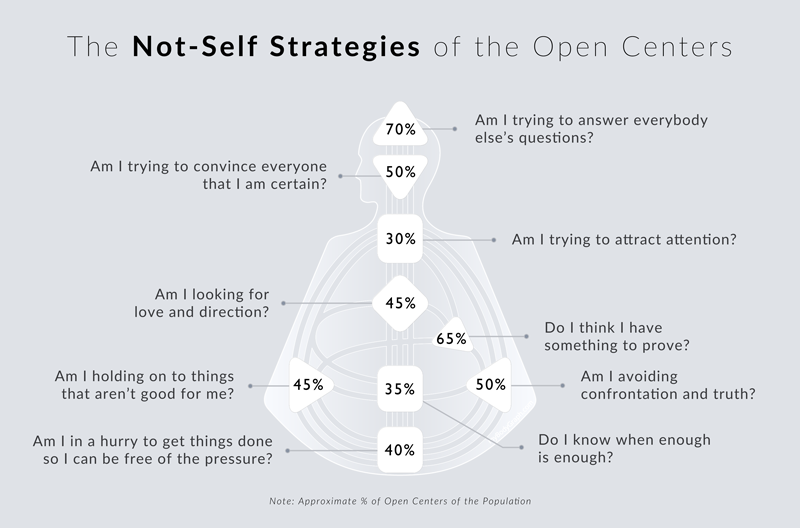 In Human Design, as we are a binary consciousness, we are endowed with two authorities: the Inner Authority of the Body to determine the life and the Outer Authority of mind to express unique awareness. In the conditioned being known as the ‘Not-Self’ the mind expresses both Inner and Outer Authority. A mind absorbed in the machinations of survival will always withhold some truth in its attempt to control its future. We are not here to be absorbed in survival consciousness. Your strategy aligns your life to the correct geometry, eliminates resistance and offers the great challenge of awareness to your personality.

The most important step is to try the experiment for yourself. Discover your design. Jovian Archive offers a free chart service, a wide array of information in the free media library, and access to free Human Design software.

Transform your life. Change the way you make decisions. Through experimenting you will learn to honor your Strategy and Authority. It is the way to differentiation and the fulfillment of purpose.

Thank you for reading
And Love Yourself
Ra Uru Hu