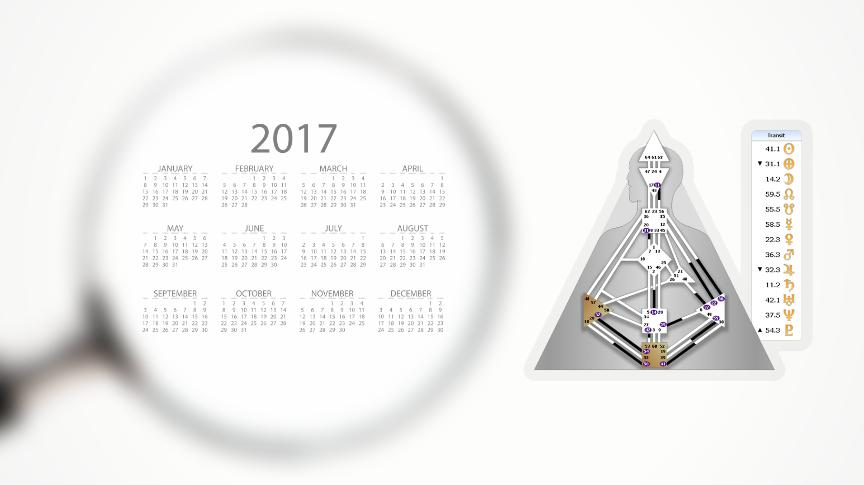 Looking back at 2017, there are some specific themes from last year’s Rave New Year transit that I observed as they played out on the global stage that are worth a review, to gain some perspective on the impact that the Rave Year Transits can have.

Gate 59.5 – The power to use love to break down any barriers; or, where the negative potential of this power becomes evident – the power of sexuality expressed as sexual power.
Gate 55.5 – The emotional strength and spirit derived from positions of power; or, an emotional openness where the spirit is at risk from conditioning.

From beginning to end, this year was a year of high visibility for women, and for their voices to be heard in a new way; and for men to question their use of power to exploit women sexually and emotionally. The mutation taking place in our human sexuality is beginning to be seen in the collective:

The point at which decline has exhausted its power

Gate 36.3 – The emotional depth to endure crisis and embrace change; or, the embrace of change, but with feelings that will not let go of the past.

That could sum up most Americans’ response to the new Trump administration. However, this was also a record year in terms of highly charged emotional responses to natural and human made crises:

Around the world, crisis and change remained on the forefront in many situations, catalyzing intense emotional reactions: How do I endure and embrace change?

And, in Rave Year 2018, we will have this gate activated again through the Moon in Gate 36.6 Justice, and a chance to watch for how this crisis management will shift world wide from an emotionalized trial and error prone nervousness about crisis, to a more objective focus that crisis is our constant companion, and the emotionality that this new focus brings.

2017 was a year in which hate groups around the world became much more vocal about their natural and unaffected devotion to their group, their tribe, their separate community. Us versus Them is becoming hard to ignore, as the various distinctions that separate humans was on display throughout the world:

Gate 54.3 – The drive when blocked to use secret means to fuel ambition.

There was certainly a lot of talk about secrets coming to light, particularly in politics and the media. However, one of the most compelling examples of ambition in 2017, took place with the meteoric rise in Bitcoin speculation. Bitcoin, as a decentralized, cryptocurrency built on a blockchain ledger with no financial backing in the ‘real’ world, certainly fits the bill for a secret means to fuel ambition. Rave Year 2017 began with a Bitcoin unit value of $920, and its current valuation (Jan 3, 2018) is $14,935 for one Bitcoin.

While not an example of the 54.3 Covert Interaction, the rise of Meghan Markle from television actress to engagement with Prince Harry is the modern version of the Marrying Maiden. This is a highly visible example of the power of Gate 54 – rising up to fairy-tale celebrity status through marriage and its tribal associations.

It was a year of increased visibility of women and re-defining sexual power. A year of crisis after crisis, bringing the question: How do I endure and embrace emotional change? A year of rising tribalism, of hate-groups, and us-versus-them mentality about immigrants, refugees, and who belongs in the community. A year in which ambition is fuelled through secrets is being seen, and our definition of what is truth or fake, is in question.

In this time of review, of taking stock of the year that has just passed within the context of our Human Design experiment, the Rave Year transits can give us a glimpse into some of the themes that have been at work on the global stage. The key for each of us remains in the mechanics of our Strategy and Inner Authority; and within this context, what we have learned about our openness through our experiences and observations.

We are used to thinking of the New Year as a time to make resolutions, to look forward to a better version of ourselves. We even say, “Have a Happy New Year”; as if wishing it would make the whole package of change and happiness come true.